What The Pumpkin Patch Can Teach You About Your Health

She literally fell off the wagon...

A few weeks back I took my family to Janoski’s Farm for pumpkin picking, hay rides and all the fun normal Fall festivities we’ve made a tradition of doing in October.

But this year things took a dangerous turn!

When we got into the farm they had all the food trucks and games sit-in off to one side (maybe you’ve seen it) and right off the side of the trucks they had the line to get on the hayride.

So we waited until the tractor with the hay wagon pulled up to take us to “pumpkin land” and loaded on as normal, but at the last second this lady comes running all-a-huff (funnel cake in hand) with her 2 kids (maybe they were her grandkids, I couldn't really tell.)

So they get up to the wagon at the last second, the kids hop on and she goes to do the same.

And on her hurried way up… she fell off the wagon!

Now my initial reaction was of course to go help this lady who’d just fell off a hay wagon.

So I immediately popped up to go help and you know what she did?

She looked me right in the eye and said “don’t you dare!”

…I was stunned… speechless

“Look at me… I fell off the wagon a loooong time ago…you can’t stop it sometimes.”

So I asked her “are you sure you’re alright?”

She said “yes” and limped over to her hay bail, and didn’t look at me again.

When we got off I watched as she told the two kids she was with to go have fun in Pumpkin Land until their dad got there.

She went and sat on the bench and watched as they played and talked about which pumpkins we’re the best ones and sized them up against each other. They laughed and had a great time as she sat alone…looking pretty sad. My heart broke for her.

Ever since that lady fell off the wagon all I’ve been thinking about is how many people there must be in the world who honestly believe once you “fall off the wagon” you can’t get back on.

But I know nothing could be further from the truth because I see hundreds of people in their 40’s 50’s and 60’s every year get to create a new lease on their health..

I’d guesstimate 97% of them tell me at the onset, they’ve just let themselves go too long and they’re afraid to start and mess it all up because that would be the final nail in the coffin.

They’re afraid to become hopeless, so they grab the last bit of hope they have and essentially say  enough is enough!

What if that lady at pumpkin-land had grabbed on to  her last strand of hope before she believed she couldn’t get her health back?

What would she have had to gain?

Save herself from public embarrassment? Yeah…

Enough strength to withstand a fall even if it still happened? Definitely.

A lifelong memory of picking pumpkins with her kids (or grandkids) together instead of taking a seat on the bench…Absolutely!

All grabbing that last strand of hope..and saying “It’s worth it to make a change.”

It’s not always about the weight {FirstName} , in fact, even if you have 75+ lbs to lose right now, I’d guess it’s not going to be the weight that emotionally moves you enough grab that strand of hope tight and say now is the time.

Don’t fool yourself into thinking a number on a scale will ever make you truly happy.

What’s going to make you happy is not watching life on the sidelines.

It’s doing the activities you love with the people you love.

It’s showing your family, their own health is worth fighting for, and giving them the hope that if you can do it.. maybe so can they.

That’s what Inner Strength is all about…

Becoming the best version of you, so you can add more life to your years, and be an active participant in life’s special moments. 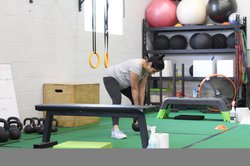 How You Can Feed Fear A "Suck-It Sandwich"