How to turn shame into smiles

Has your doctor ever shamed you for not taking the best care of your health?

I’ve heard these kind of wake up stories many times

Even after many rounds of physical therapy, her knee pain wasn’t getting much better.

One day she went to her pcp for a stress test and her number were simply not good.

In Carol’s words...he shamed her for not taking her health seriously.

It sat in Carol’s mind awhile, but she wasn’t acting on it.

Until the first time she tried to get on the floor with her grandson who had just started to crawl.

Here she was not only getting shamed by her doctor, but now unable to get off the floor by herself.

Carol was losing her independence in her mid 60’s! (Not something she wanted.)

Even with her bad knees.

I’ll space you the details of how, but 8 weeks later, Carol felt better than she ever had.

It took the doctor awhile to get her heart rate up, and he did a double take at the nurses..Carol smiled.

Once they finally got her heart rate up, Carol blew the test out of the water!

After it was over you know what the Doctor said?

Carol came directly to us and told us the story...she was beaming with pride and told me to share… so here I am.

You’re not by a long shot.

Now’s the time to grab one of the last remaining founding memberships for our new location in Upper Saint Clair.

...or if you’re closer to Robinson we have a special deal for you too.

You’re capable of more than you know,

When you have chronic pain and know your physical health is deteriorating because the pain makes it hard to even move, let alone exercise..it feels horrible.

But I'm here to tell you, it’s not an impossible puzzle.

However, most will try to solve it in the wrong order.

They try to minimize their calories 1st because it’s what they can control.

But this just leaves them hungry and tired.

Then they try to walk more because it’s something they can do.

But even that sometimes leaves them feeling sore and in pain for days on end.

So what are you supposed to do if you can’t minimize calories and you can’t even walk for exercise?

Here’s my first (most effective) step.

When your gut is inflamed you feel (amongst other things) very fatigued.

Neither of these things paired with hopelessness are a very good addition to your mindset.

It leads to an easy downward spiral.

So how do you reduce gut inflammation?

Everyone is different, but a great first step is to reduce one of the following

Which should you choose?

I’d start with whatever is most prevalent in your diet and go a week without it.

Remember this is about boosting your energy and finding what makes you feel best.

You’ll also naturally reduce empty calories because all these foods are full of them. (Score!)

Once you address your gut inflammation, your metabolism can get back to regulating itself and then we’re cooking with gas!

I just gave you the first step we take in our “Nutrition for Healing” protocol at Inner Strength.

If you’re a woman with pain/injury and 20-200 lbs to lose and have been feeling hopeless about reversing the cycle, this plan is for you! 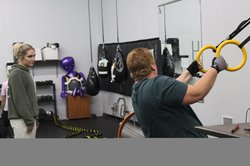 Are you making this mistake when you think about improving your health?