Can you teach your old dog mind new tricks?

What this means for your health and fitness journey...

When trying the first attempt at doing just about anything in life, enjoyment (much less perfection) shouldn't be expected.

Just the second attempt at anything hard will be much easier and more enjoyable.

Not by a little bit, but by a LOT.

This is true of just about anything but especially of your health.

All first attempts are sloppy and lame.

Most people will quit after their first experience with things that don’t go so well.

But if you have Inner Strength, you know the first attempt is destined to be sub-par…

…so you accept it, and move toward the next attempt.

But in this , you will learn enough to get a better assessment of the whole picture and what it really takes to attain a goal on your second attempt.

Just that much more effort will propel you ahead of 95% of people walking the earth.

That’s something to hang your hat on! (all victories are worth celebrating)

The sad part is, as people get older they start to decide whether they like stuff based on their first experience.

All of this is to say, maybe you can’t teach an old dog new tricks simply because, if he doesn’t get it the first time, he gives up!

Everyone wants to climb the mountain, but the big difference between success and failure with your health is showing up tomorrow and giving it one more shot!

That exercise you screwed up… try it again.

That meditation thing you couldn’t sit till for….give it another go.

That replacement recipe you overcooked… one more time.

Expect the first time to be a learning experience and the second time won’t seem like the same mountain it once was. 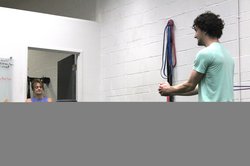 5 Reasons Parents Should NOT Improve Their Health