Complete Step 1...
STEP 1 OF 2
Enter Your Info Below Then Schedule Your No Pressure Get To Know Ya Call on the Next Page
CONTINUE TO STEP 2 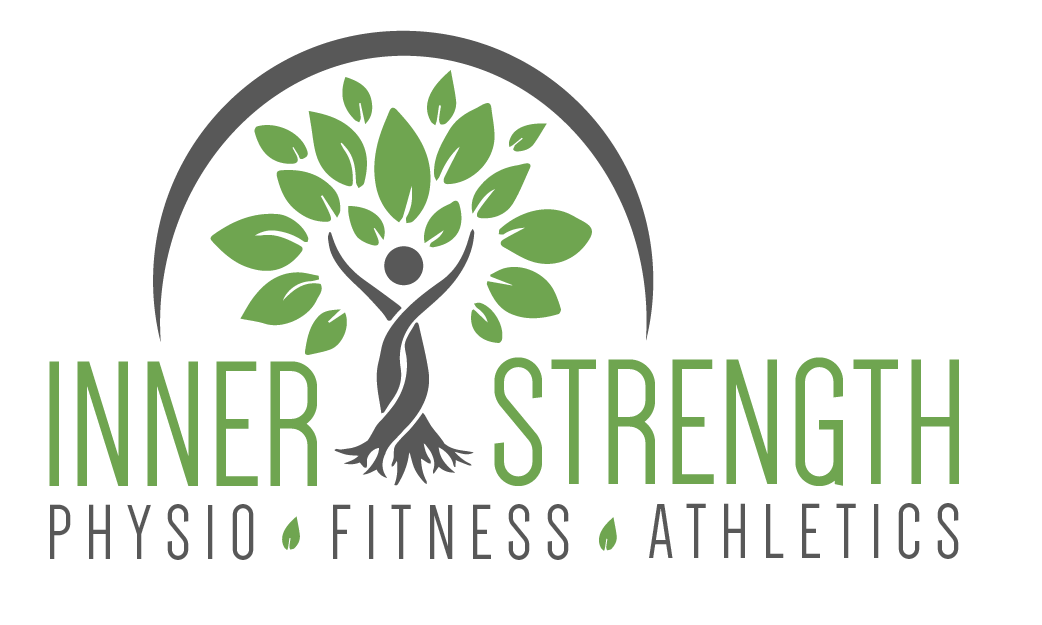 Get Started Today
SOUTHWEST PITTSBURGH RESIDENTS:
End Pain - Lose Weight - Get Energized
~ And Learn How to Stay That Way Forever ~

It's so much more than a gym... it's a lifestyle transformation center that makes positive change permanent
Click Here to get started 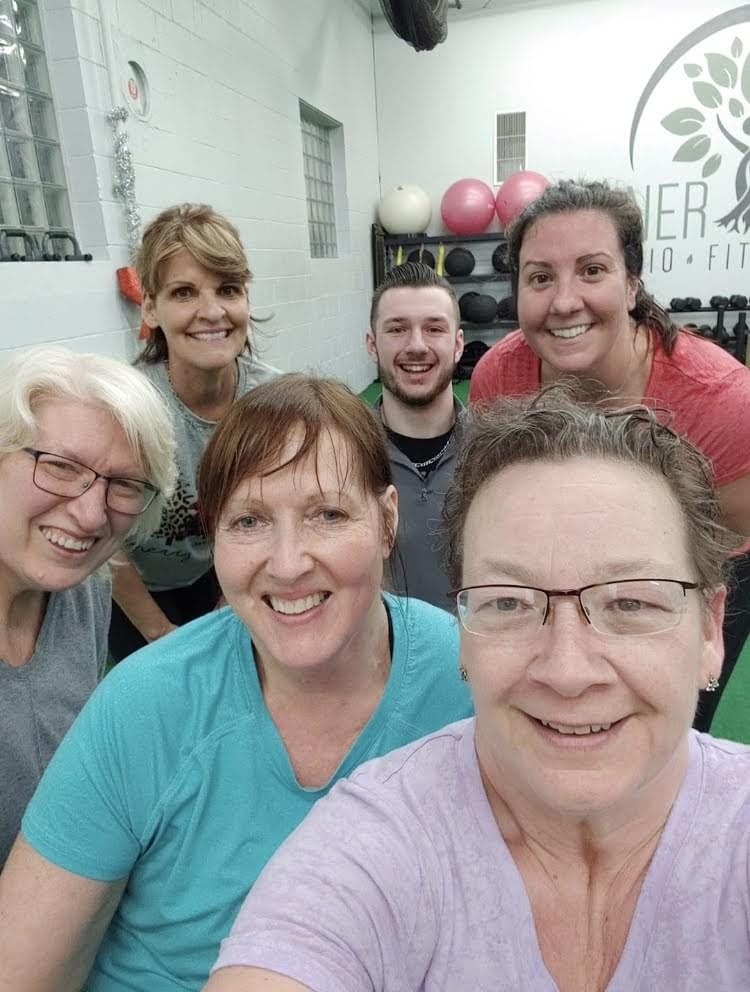 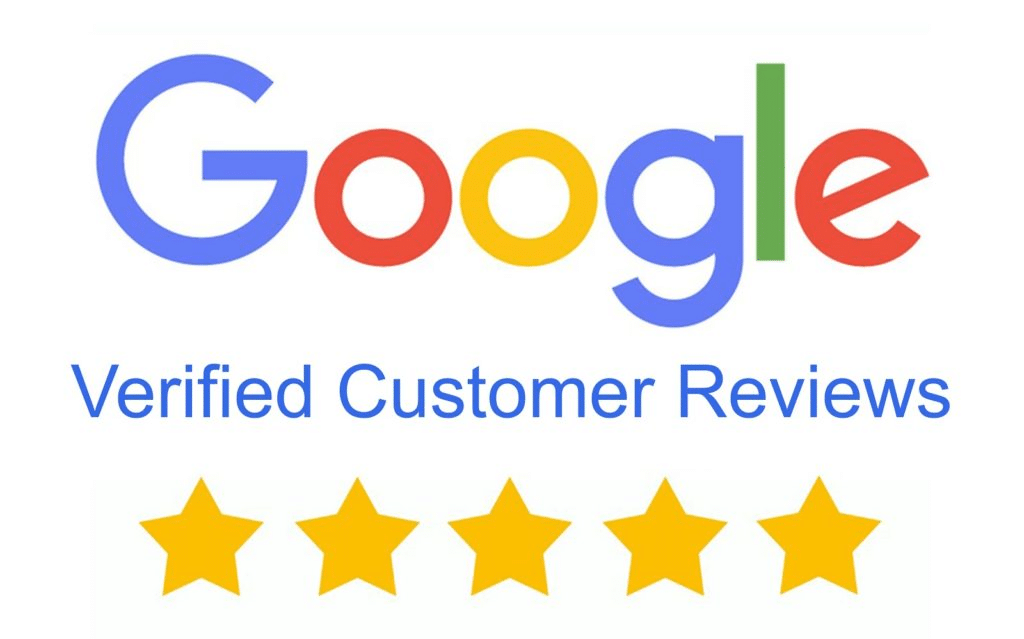 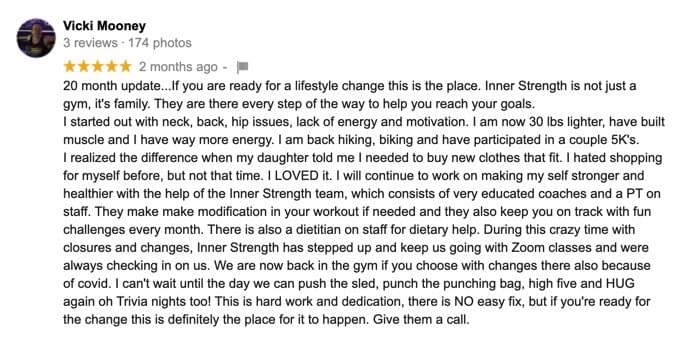 Our Promise to You:
100% Dedication to Restoring Your Confidence in the way your body looks, feels and moves
Everything we do at Inner Strength is built specifically for your unique body and your unique lifestyle.

We know you’ve probably been to gyms in the past. This is completely different.

They have a revolving door of under-qualified trainers with overcrowded classes that get stale
They have you do exercises you aren’t ready for.
They’re ONLY about sweating or lifting and giving you the bare minimum personal service (if any at all.)
They leave you in a constant state of worry, confusion and frustration.

At Inner Strength, we knock out the worry, confusion & frustration from the get-go.

We sit down and design a plan with you to ensure you’ll be comfortable (and wildly successful) every step of the way by picking the appropriate starting point in our continuum of physical therapy, fitness and nutrition services.
LOSE WEIGHT & GET TONED... FAST
Fun, energizing workouts to fit any schedule! 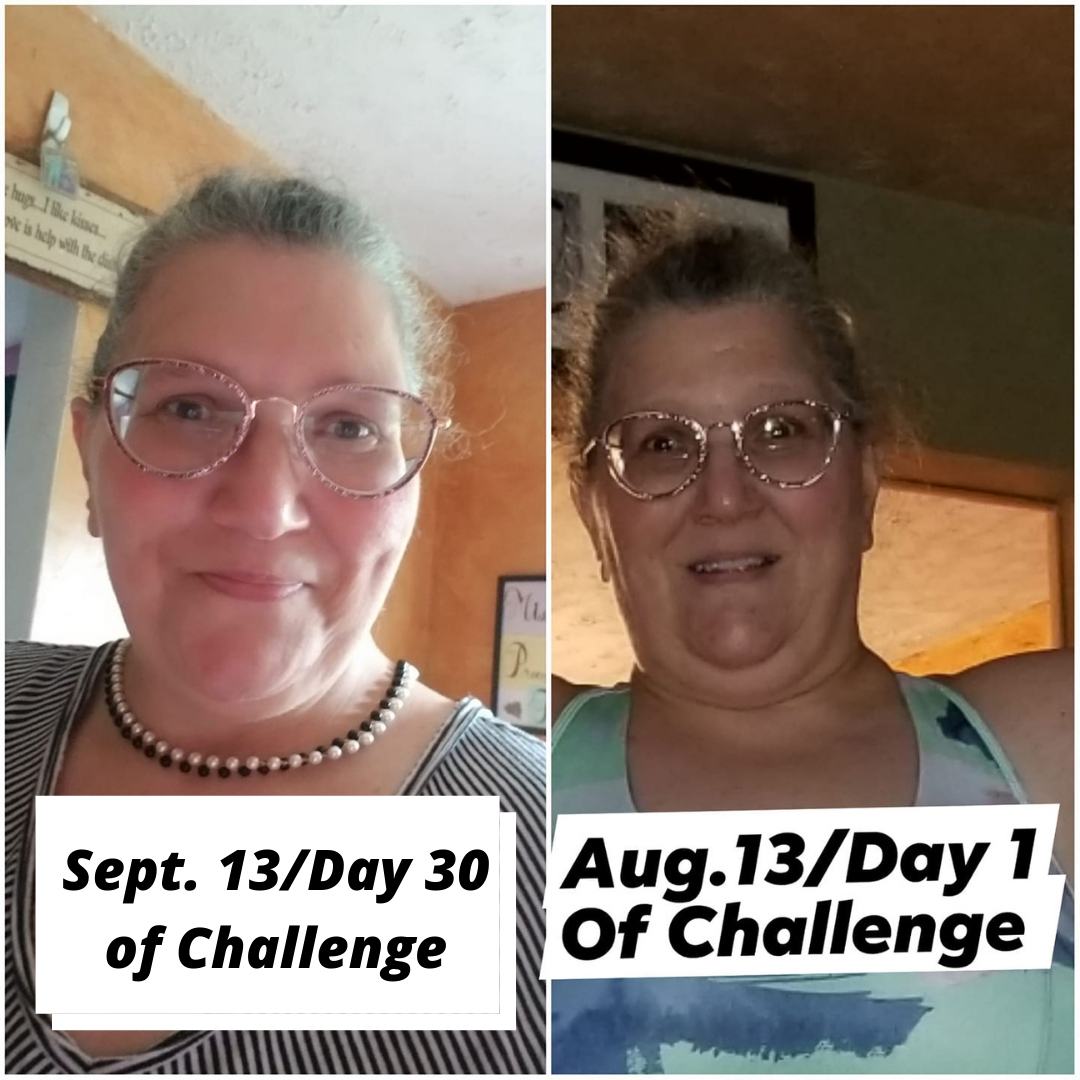 KEEP IT OFF FOREVER
With our best-in-the-world health & lifestyle coaching built to support you for the long haul instead of the all-too-familiar "I've lost 160 pounds but it's been the same 10 pounds 16 times!" 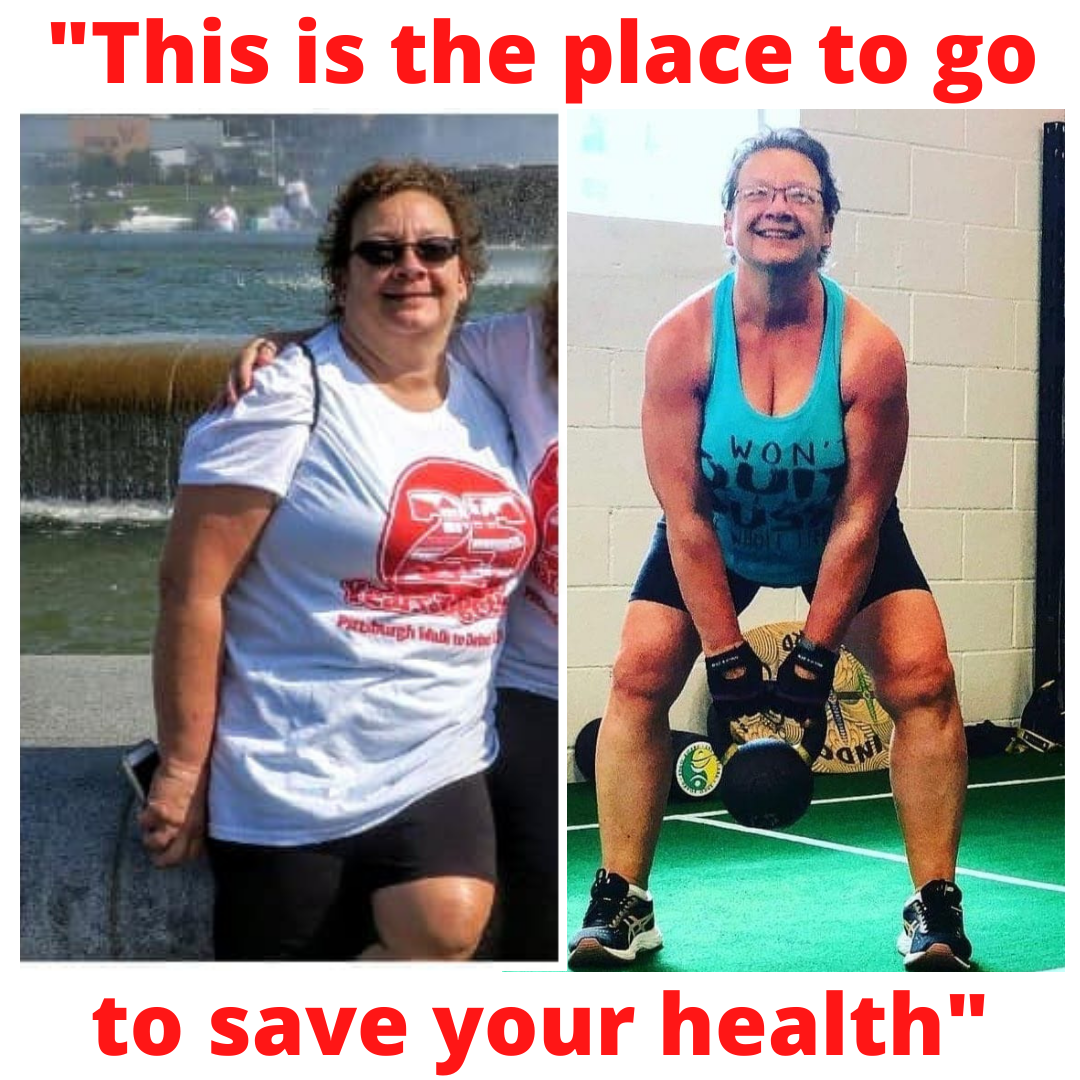 END YOUR PAIN FOR GOOD
With our in-house physical therapy clinic and distance health consulting! 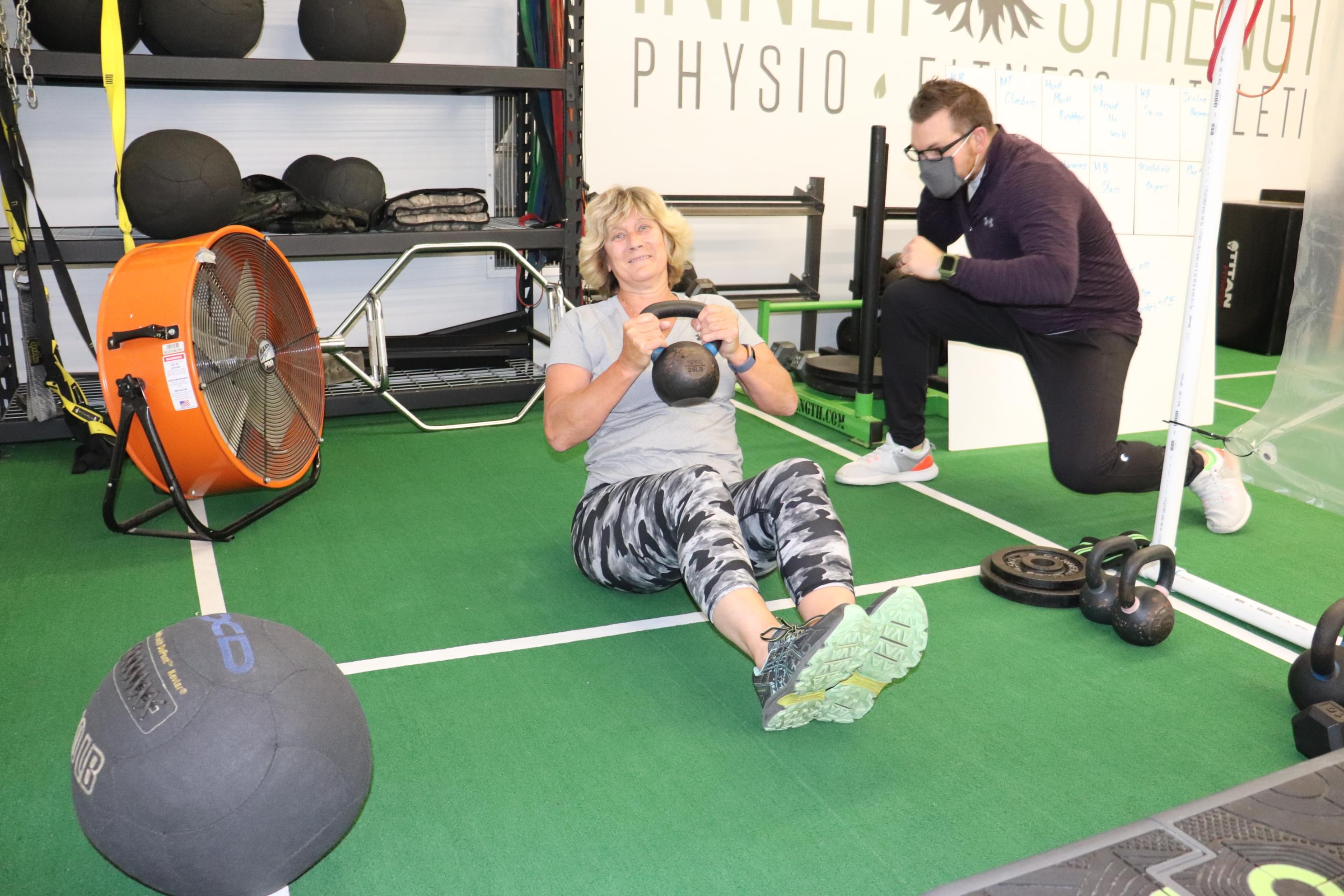 No matter where you are on your fitness or pain relief journey we have a program that will
meet you where you are and help you get where you ultimately want to be. 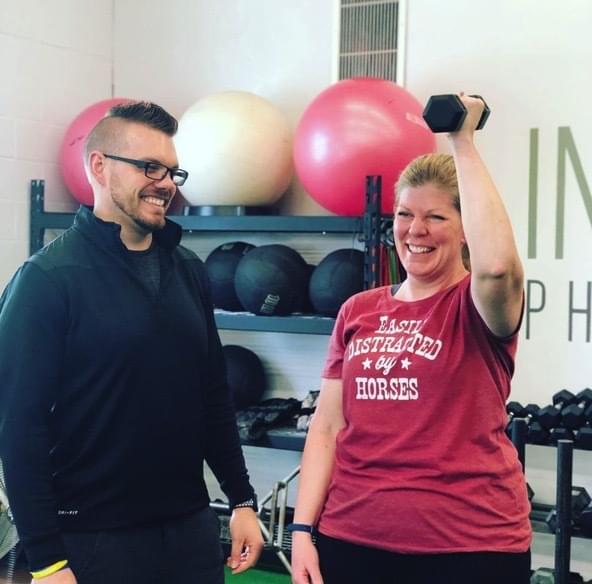 REBUILD
In Rebuild you work 1:1 with our Doctor of Physical Therapy (in-person or telehealth) to get out of chronic pain or injury so you can move pain free, without worry of re-injury and can being the transition back to modified fitness (if you want to.) In both rebuild and return your nutrition program is geared toward anti-inflammatory response to assist your healing process.
Click here to get started today
RETURN
In Return you'll continue to work with our DPT (who is also a nationally certified trainer) to return to a modified exercise program that continues to strengthen weaker body parts and muscle groups while re-building foundational core strength, balance, endurance and movement ability.
Click here to get started today 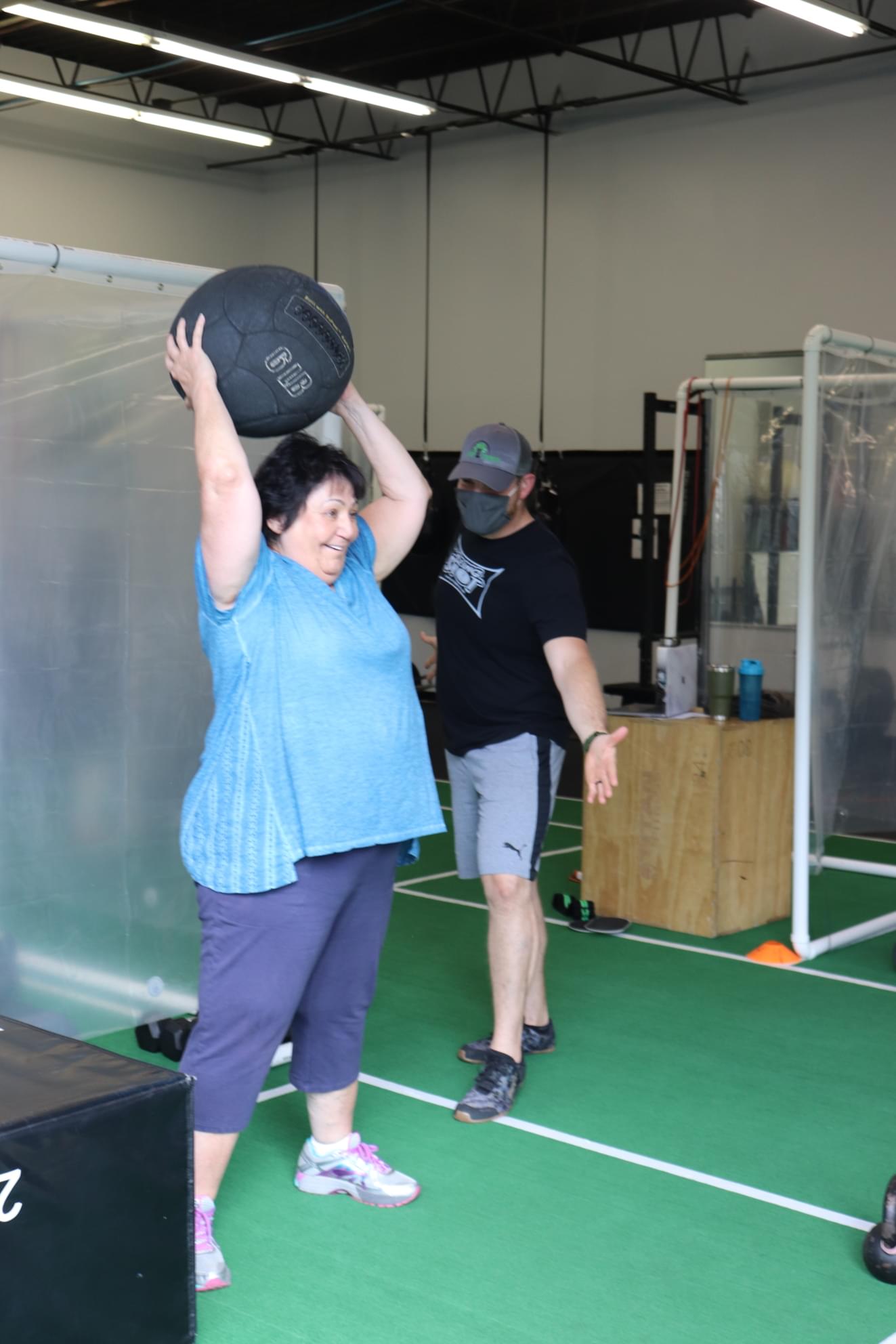 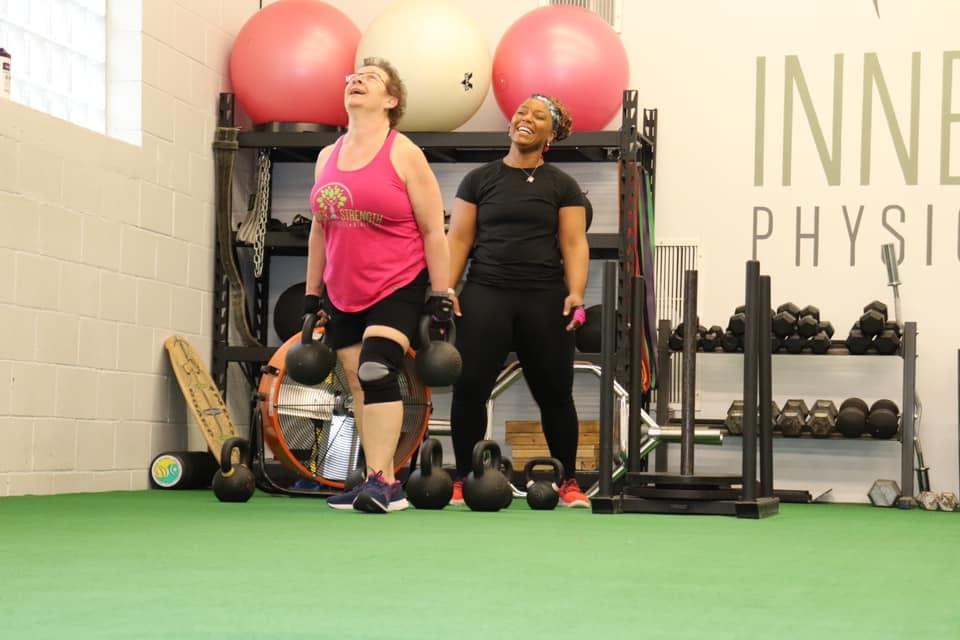 RISE: Our Small Group personal training program is our signature, built-just-for-you fitness (strength, fat loss and/or muscle building) program that we design specifically for your unique goals, limitations and schedule but you get to enjoy the comrade of reaching your goals alongside other women just like you.
Click here to get started today 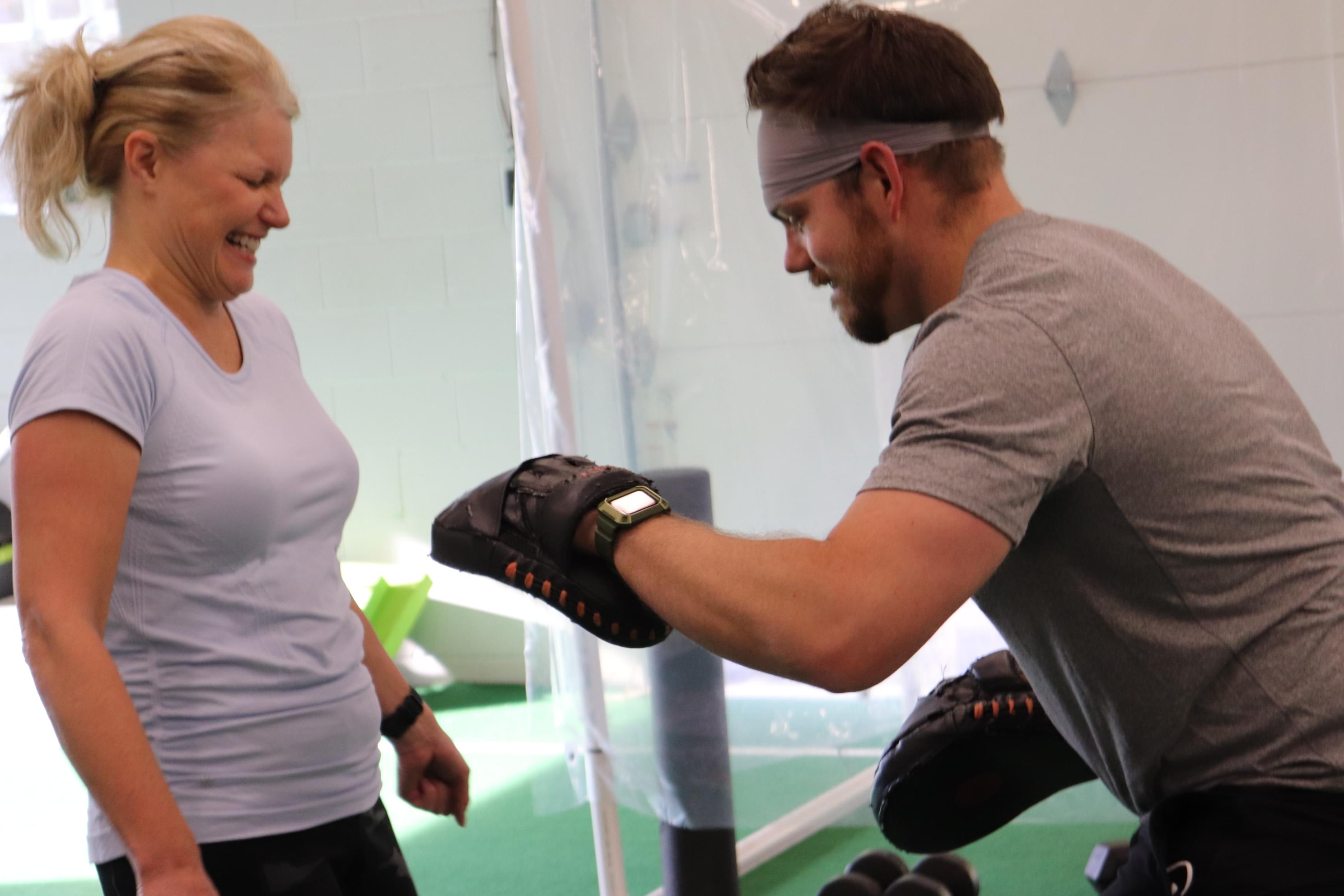 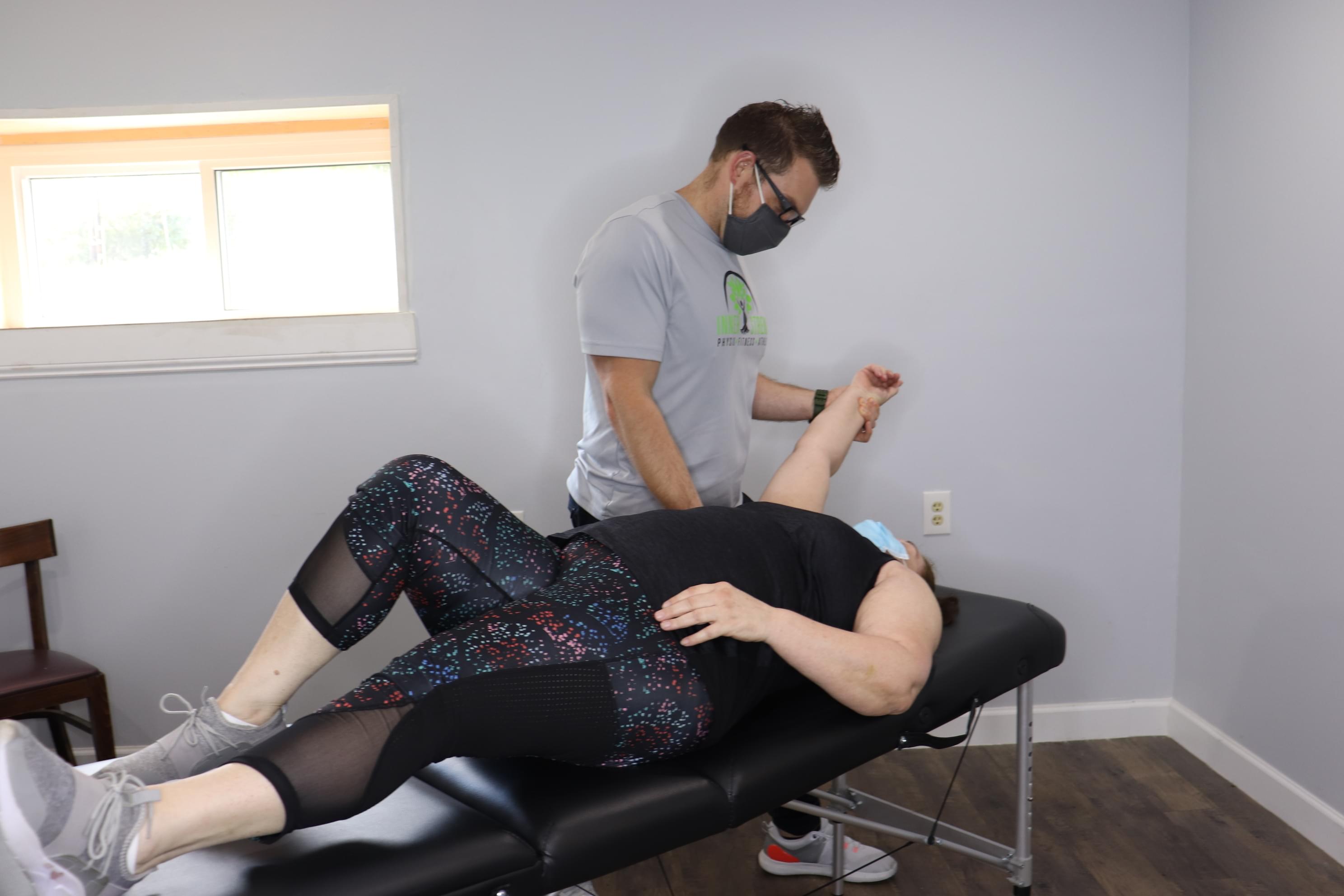 RECOVER
This movement & mobility focused program run by our DPT is designed to speed up the recovery process, and help you manage the common aches, pains and soreness that comes with regular exercise for everyone (it's not just you... we promise :)
Click here to get started today 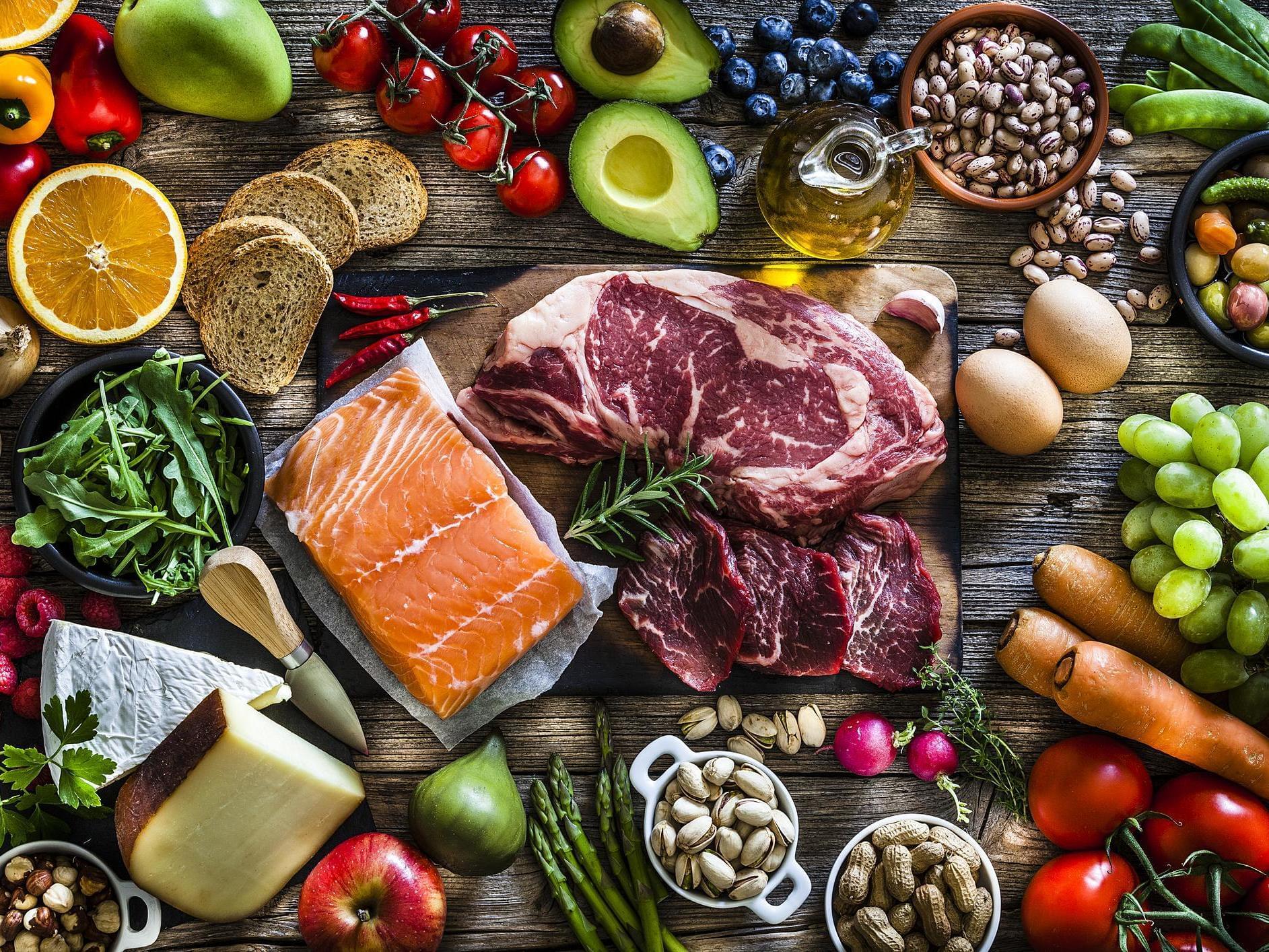 Nutrition
1. Every program above includes a custom built meal plan designed to help you achieve your specific goals and nutrition coaching from our professional team of certified trainers who will keep you accountable for continually making progress.
2. We are also proud to be the host site of Pittsburgh's premier dietitian practice, Case Specific Nutrition (who accepts most insurance plans.) If you want the most in-depth nutrition counseling available, have pre-existing conditions, or want to focus on improving your overall relationship with food, click the button below!
Click here to get started today 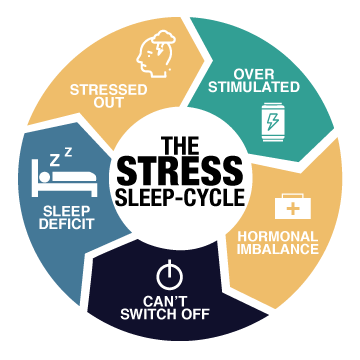 "The Roots" Health Coaching
Simply put, The Roots is our educational program that teaches you not only how to lose weight, get strong & pain free, but teaches you how to keep those results for life.
Meaning, yes, we actually teach you how to not let stress and sleep issues get in the way of your health when you leave our care. For most other fitness & healthcare facilities, this is an opprotunity for them to bring you back in.
For us, it what proves our worth.
Stress and Sleep will always and forever be the two factors that limit human motivation and consistency.
Because of this, our coaches provide you daily lessons and accountability check-ins on how to manage your stress and increase your sleep quality (along with other healthy lifestyle tips,) and if you don't check in - you'll hear from us that same day.
When you have a team holding you accountable, you can't fall off the wagon.
Click here to get started today
Do you want to get the results you want want with fun, safe, and effective workouts in as little as two hours per week? 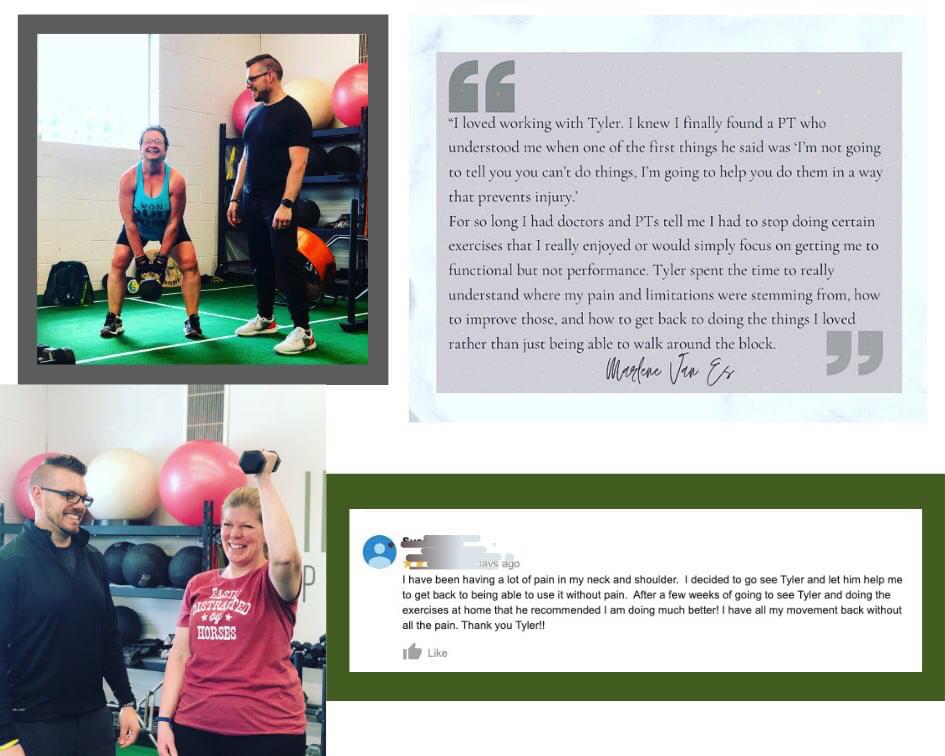 In Pain? We'll Get You Out.
If you're starting this journey with any type of chronic pain or injury, you’ve come to the right place. Our in-house Doctor of Physical Therapy offers even more personal attention and private sessions to work around your restrictions and End Your Pain Forever.

Open Monday - Friday 6:00 AM - 9:00 PM
& Saturdays from 8:00 AM - 11:00 AM
*Sundays by appointment only
COMPLETE ATHLETIC DEVELOPMENT FOR ATHLETES
AGES 11-18 IN ANY SPORT
Our complete athletic development program is designed to help any athlete get Bigger, Stronger, Faster, Stay on the Field All Season, Catch the coaches eye and advance their playing career from Middle School Through High School and Beyond.

Step 1: Assessment
We understand each athlete in every sport has unique needs because of this we start each athlete we train with our proven athletic assessment & goal setting process.
In the assessment we are going to look for your athletes strengths, weaknesses, imbalances and find out where their biggest glaring needs are specifically in relation to their sport and position.

Next, we’ll breakdown their specific goals and design a plan specifically for them to have success.

Depending on the age, ability and goals of the athlete they will enter either our Foundations or Premier Programs complete with individualized workouts, at home exercises, body maintenance and recovery plans, nutrition coaching and meal plans where necessary.
Click here to learn more
ATHLETE SHOWCASES 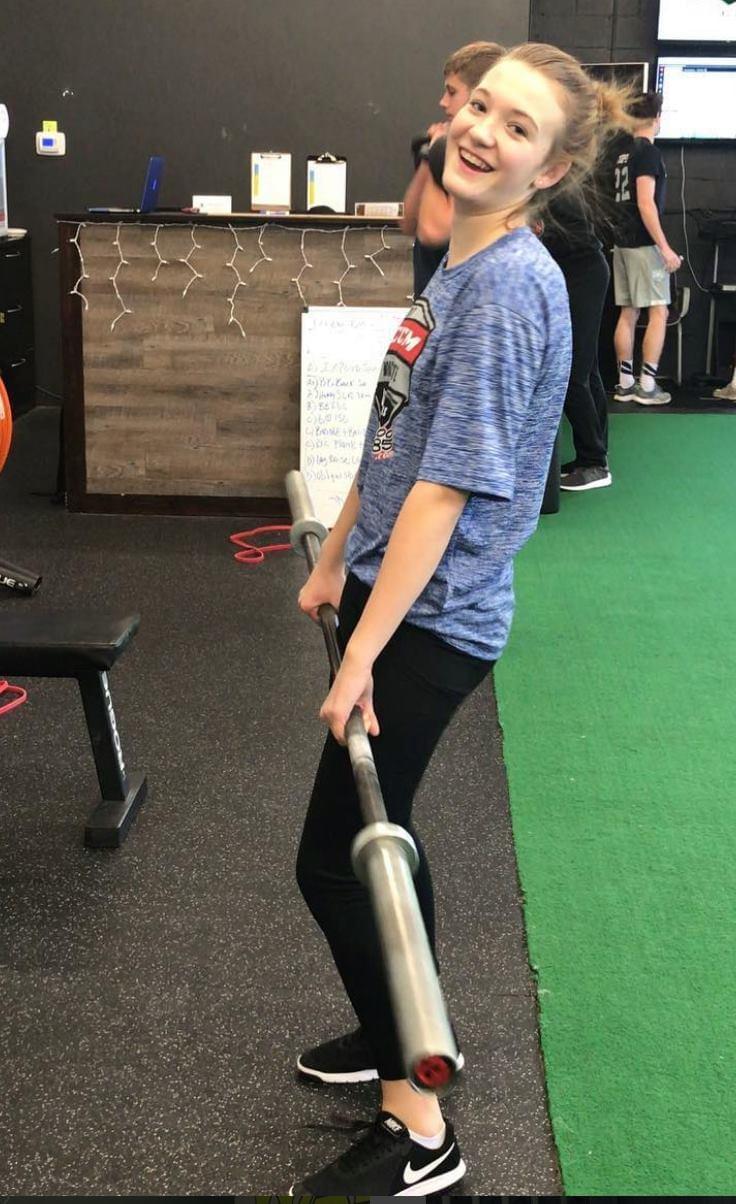 "My children (Brendan and Kaitlyn) needed help with their strength and athleticism. Through their sessions with Inner Strength they have increased.
Both areas and continue to get stronger while increasing their confidence. You can see the growth that they have made in the areas that need improvement and that has translated to the ice. They are bigger, stronger faster and more confident in their abilities. "
- Derek Schooley (Head Coach, Robert Morris Hockey)
Click here to learn more
"Austin came to WadeTrained to put on muscle and improve his all around strength and speed for baseball.
During his first off-season training at WadeTrained he gained 30lbs of lean muscle in 6 months.
Now Austin is ranked by Perfect Game Baseball as the #1 Freshman in the Country
He recently had his bat speed clocked at 98 MPH at a national showcase. 6 MPH faster than anyone else at the event!"

Update: Congrats Austin on being the 12th Overall Pick in the 2020 MLB Draft! 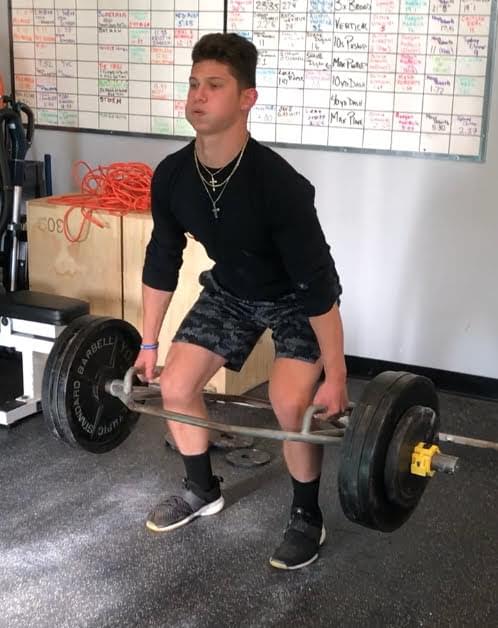 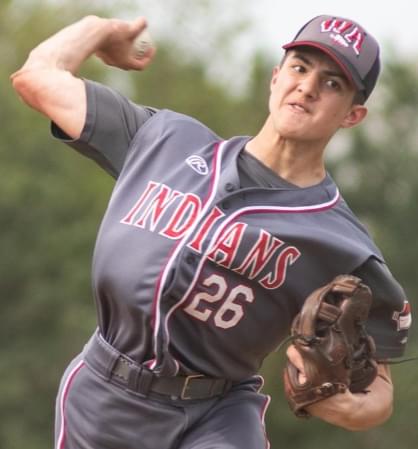 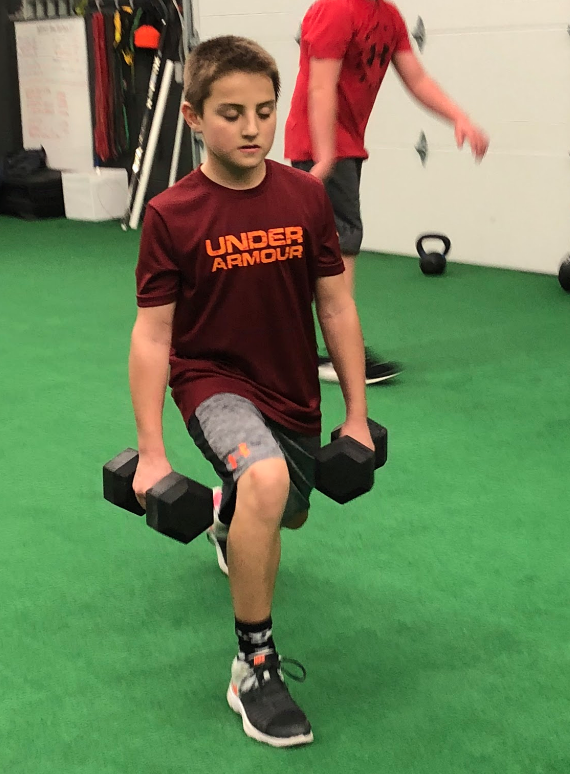 Click here to learn more
Greater Spin Rate and Velocity Than I Ever Could Have Imagined at this age.
Gavin and Brady Miller
The Following is an Interview with Brady and Gavin's father, Brant Miller.
1. What "problem" or what did they need to work on before coming to IS? Gavin had a small fracture in his left hip and we were looking to rehab and strengthen the hip. As to Brady, I don’t think there was a “problem” rather we were just interested in starting him on a workout regime similar to Gavin.
2. What is different about our service that has made the biggest difference for them and you? The kids love the trainers and buy into the workout programs. They actually compete against each other and the trainers, in a very good natured manner, foster that competition and push each one to achieve their best results while utilizing proper form.
3. When did you realize our service was working for them? Gavin’s hitting and arm strength really shined about three months into the workouts when he was in a baseball tournament in Las Vegas. He had rehabbed the left hip fracture, his left wrist fracture (both from football) had healed, and he was hitting balls in the gaps harder than I had ever seen. His velo on the mound surprised me as well. As to Brady, his athleticism on the basketball court really began to stand out. His ball handling and shooting had always been excellent, but now, one of the shortest on the court, was jumping over taller boys for rebounds and running past everyone. He really began to stand out amongst all the other players.
4. What does their game look like now that their problem is being solved? The sheer physical fitness of both boys is amazing. Gavin: as a QB, his passes have a greater spin rate and velocity than I could have imagined at this age. In baseball, his range at shortstop is very good, his power at the plate continues to surprise me and he has his fastball up to 86 mph. Brady: although usually one of the shortest on the court or on the baseball field, Brady is always one of the most gifted athletes playing. He makes shots in basketball that still surprise me and almost always out-physicals whomever he’s playing against. In baseball, he’s one of the hardest hitting leadoff hitters that we see at his age in travel ball, and because of his strength and speed, makes plays at shortstop that I usually don’t see made at his age level.
5. What are they and you looking forward to in their athletic future with the help of IS? We are all looking for them to continue their strength and agility increases in a safe manner. Above all, I’m hoping this will create a blueprint in both of them going forward so they can each maintain their physical health regardless of their paths in life.